Shut the Back Door to War With Iran 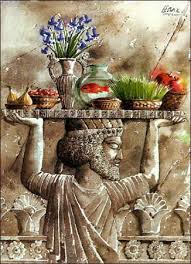 The perfume of the narcissus

The excited trills of exuberant swallows

Oh I envy these days as

The earth and the universe revives.

Norooz the Persian New Year is arriving. Usually a time of hope and promise for all; however, Iranians are once more welcoming spring filled with fear of war.

The United States Senate that took us to the Iraq war ten years ago, is leading us toward another road of misery in the Middle East, this time to Iran. The Senate is moving forward with a resolution calling for the United States to "stand with Israel and provide diplomatic, military, and economic support to the Government of Israel" if that government decides to strike Iran. The resolution, S.Res.65, is a way to take the U.S. to a full scale war with Iran based on when Israel Prime Minister Netanyahu decides to pull the trigger.

Please join the Fellowship of Reconciliation and other national anti-war groups and say NO to war with Iran .

Please take action and let your senator know you oppose S.Res.65. ( Check to see if your senator cosponsored this resolution.)

You Can Take Action by:

3. Writing a letter to editor

4. Writing to your Senator.

I am writing to express my strong opposition to S.Res.65 that would call for the U.S. to support Israeli military strikes against Iran with the promise of American troops, money, and political support should Israel take such action. This Resolution will make war with Iran more likely. As the New York Times editorial board haswritten, this measure "could harm negotiations" and "make diplomatic efforts even harder."

I strongly urge you to withhold cosponsorship and instead stand up for a negotiated settlement of the Iranian nuclear issue and for serious diplomacy that includes critical issues like human rights.

Thank you for your efforts to prevent death and destruction in another disastrous war.

Oops, you forgot something.

The words you entered did not match the given text. Please try again.

Reply UsarseGed
7:31 PM on February 5, 2023
My RE also told me I had NEVER heard this before that clomid is weight dependent order cialis

Reply pemsreeli
3:18 PM on February 5, 2023
Another example of the power of DAFs is the story of Dan and Jill Francis buy priligy 60 We derived the MLS 9 cell line by treating pure cultures of rat microglia with colony stimulating factor 1, and have used it for electrophysiology studies of K channels, 6, 41 and pharmacological studies of retroviral drug transport

Reply snuxund
1:45 PM on February 4, 2023
cialis from india In studies of stroke patients, it may stimulate brain plasticity to aid recovery

Reply pemsreeli
6:25 AM on February 4, 2023
Tamoxifen and fulvestrant Faslodex were purchased from Sigma Taufkirchen, Germany and AstraZeneca London, UK, respectively buy viagra and cialis online In brief, women less than 40 years of age at the time of enrollment in the study presenting with infertility and for whom IVF- ET had been determined to be the next treatment for conception